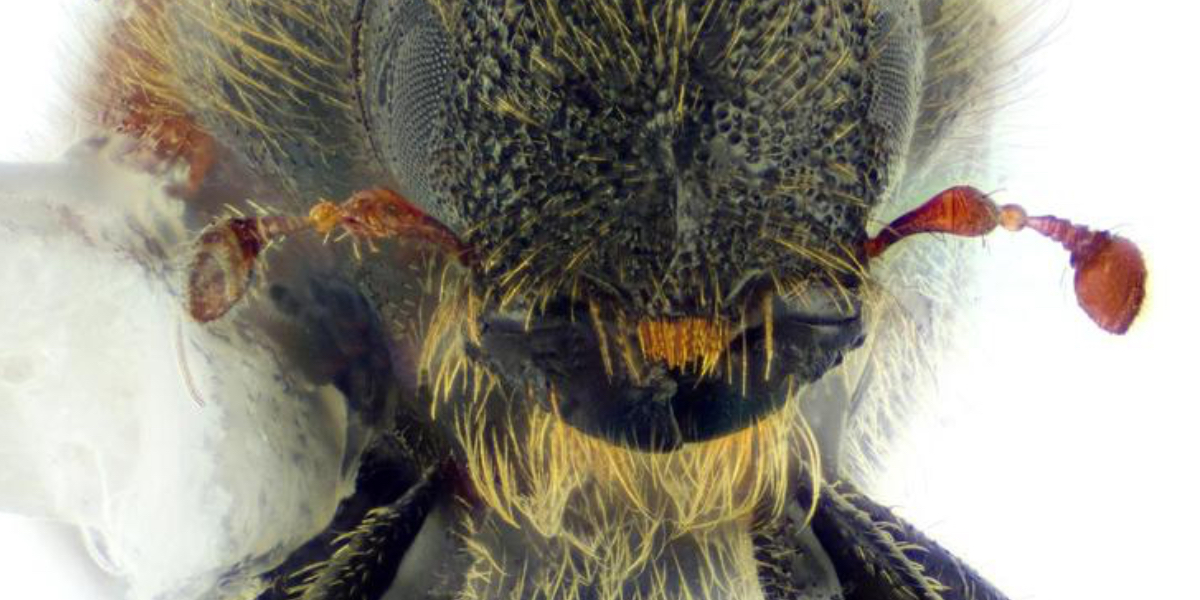 SYMPTOMS OF A WARMING PLANET

Over the past 20 years the proportion of Colorado forests impacted by insects and disease has dramatically increased. The impacts of these outbreaks are visually striking: Forests that were once green and vibrant have been replaced by ghostly gray sentinels. As millions watch iconic landscapes change before their eyes, two questions are repeatedly asked: Why is this happening and what can we do to stop it?

Neither question has a simple answer. The insects and diseases responsible for the vast majority of tree mortality in Colorado are native. Forests are always changing, and, like fire, native insects and diseases are a source of disturbance. By killing older trees, they create forest diversity and renewal. But the current bark beetle outbreaks are abnormally large, a product of wildfire suppression paired with an increasingly warm and dry climate. As with maladies in humans, it is important to treat the cause rather than the symptoms. Forest managers have a fraught history of attempting and failing to control beetle outbreaks. Rather than trying to stop beetles, our attention should be on rapid decarbonization to limit the impacts of climate change paired with responsible scientifically-informed forest management.

In 2015, 1,054,000 acres of Colorado forests were affected by insects and disease. This is an increase of over 100,000 acres from 2014 with much of the increase being in the western spruce budworm. Roaring Fork Watershed forests saw a 5,000-acre decrease in damage compared with 2014, with 40,906 impacted acres. As in 2014, much of the current infestation in the watershed is from the western balsam bark beetle which affects subalpine firs. ››› 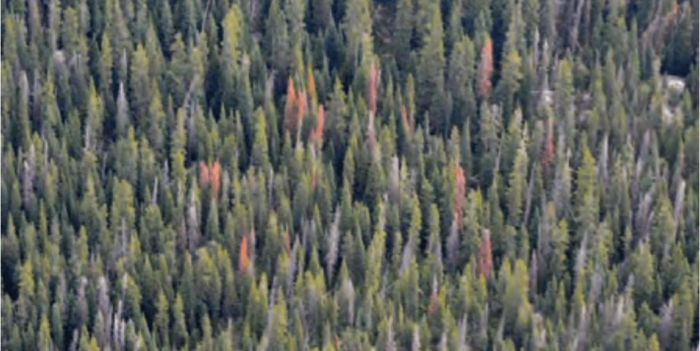 For the 18th consecutive year, subalpine fir decline (SFD) was the most pervasive insect/disease in Roaring Fork watershed forests, comprising 75% of all insect and disease damage in 2015.

Subalpine fir decline does not refer to a specific pest or disease, but rather to the collective mortality and degradation of the species. SFD is typically attributed to the combined effect of the western balsam bark beetles (Dryocoetes confuses) with either canker causing fungi (Ceratocystis dryocoetidis) or root disease fungi (Armillaria spp. and Heterobasision parviporum). Both the beetle and fungi are native pests, and similar to recent outbreaks of other native pests (i.e. mountain pine beetle, spruce bark beetle, Douglas fir beetle, etc), research has found a link between SFD and climate. SFD occurs mostly in zones with moderate temperatures and moderate precipitation whereas areas with low temperatures and high precipitation were more likely to have healthy fir trees. 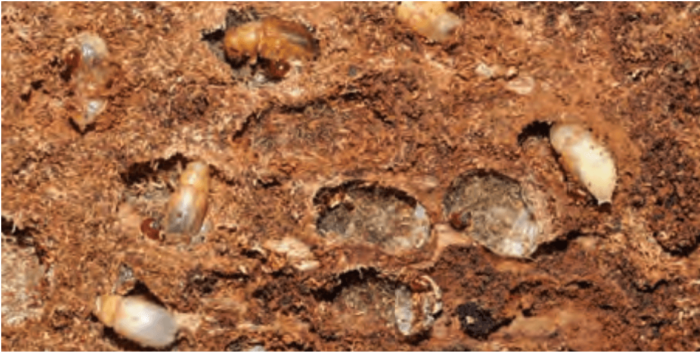 With 40% of the Roaring Fork watershed comprised of spruce-fir forest, a spruce bark beetle outbreak is of great concern.

For the fourth consecutive year, spruce beetle was the most pervasive forest insect in Colorado. In 2015, 409,000 acres of the state’s high-elevation Engelmann spruce forests were impacted by the spruce bark beetle, a 76,000-acre decrease from 2014. Much of this decrease is attributed to the depletion of large diameter trees in impacted areas. Despite the decrease in total acreage impacted, the beetle continues to expand its range with 136,000 new acres of impacted forest.

Currently, large-scale spruce beetle outbreaks have been centered in southwest Colorado but are steadily moving north and east. In the Roaring Fork watershed, 1,009 acres of forest were impacted by the spruce beetle in 2015, down from 2014’s historic high of 6,898.

On page 18, we look closely at the spruce bark beetle’s life cycle as well as potential impacts in the Roaring Fork Valley.

In the Roaring Fork Watershed, a mere 10 acres of forest were impacted by mountain pine beetle in 2015. This is especially impressive when compared with the 12,432 acres locally impacted by the mountain pine beetle at its peak in 2010. At this endemic, or natural, level, the beetles play an important role in forest disturbance and nutrient cycling regimes by opening up space for sunlight to reach the forest floor. This process results in forest with species and age diversity, which reduces susceptibility to future widespread beetle epidemics.

Douglas fir beetle continues to impact isolated areas of our watershed with the potential for large future impacts.

In 2015, the Douglas fir beetle impacted 1,064 acres of forest in the Roaring Fork watershed. This is a significant decline from record highs in 2013 and 2014. Despite the decrease, Douglas fir beetle is still a major concern. Douglas firs are more tolerant of heat and drought than any other widespread conifer in the area making them more resilient to anticipated changes in climate. As local forest adapt to climate change the number of Douglas firs will increase, an outbreak of Douglas fir beetle would limit expansion and hamper natural adaptation. 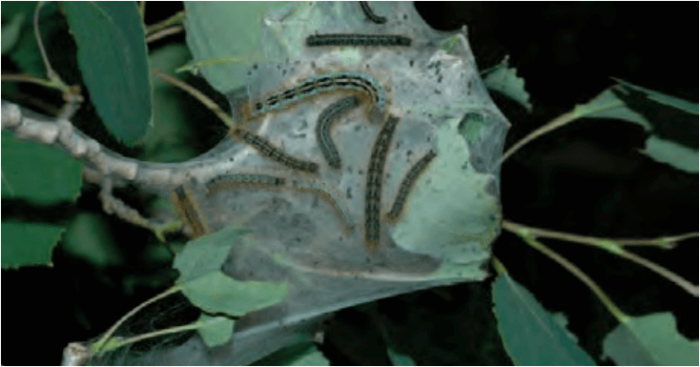 This increase marks a significant departure from the trend of decreasing impact after 2008’s high of 27,590 acres. In the Roaring Fork Watershed, the primary agent of aspen defoliation is the western tent caterpillar (Malacosoma californicum), an insect whose larvae feed on the leaves of aspen trees and other mountain shrubs, including chokecherry and mountain mahogany. Fortunately, extreme outbreaks generally only last 2-3 years, evidenced locally by high levels of impact from 2006-2008 followed by a dramatic decline to the relatively low levels observed in the last year.

Aspen trees are especially susceptible to drought conditions. While precipitation in 2015 was normal, temperatures in Aspen and around the globe were higher than average, meaning less available water. Aspen trees have ecological and aesthetic significance to our area. In the Roaring Fork Valley, aspen forests are second only to the riparian areas in terms of biological diversity. They provide critical habitat to a wide variety of plant and animal species. They are also iconic to our community and responsible for much of the scenic beauty that draw visitors to our area, contributing to the economic well-being of our region. 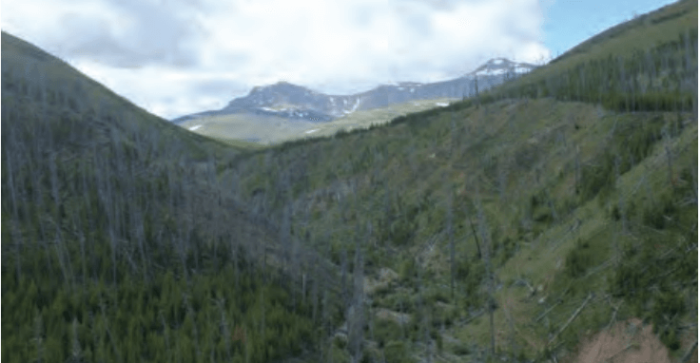 Statewide, 2015 mortality rates were at their lowest since 1996, impacting 15,000 acres. Most of this damage occurred in northern Colorado. While this is certainly good news for our forests, this decrease in mountain pine beetle activity is mostly due to the depletion of available host trees, which is to say that the beetles have essentially eaten their way through a large portion of Colorado’s lodgepole and ponderosa pine forests. 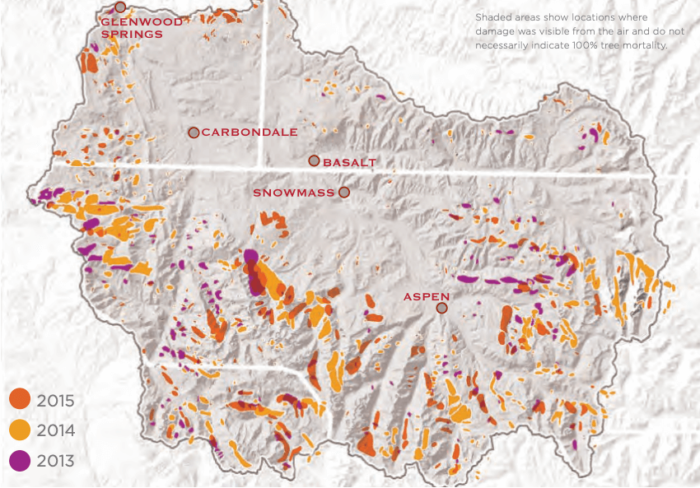