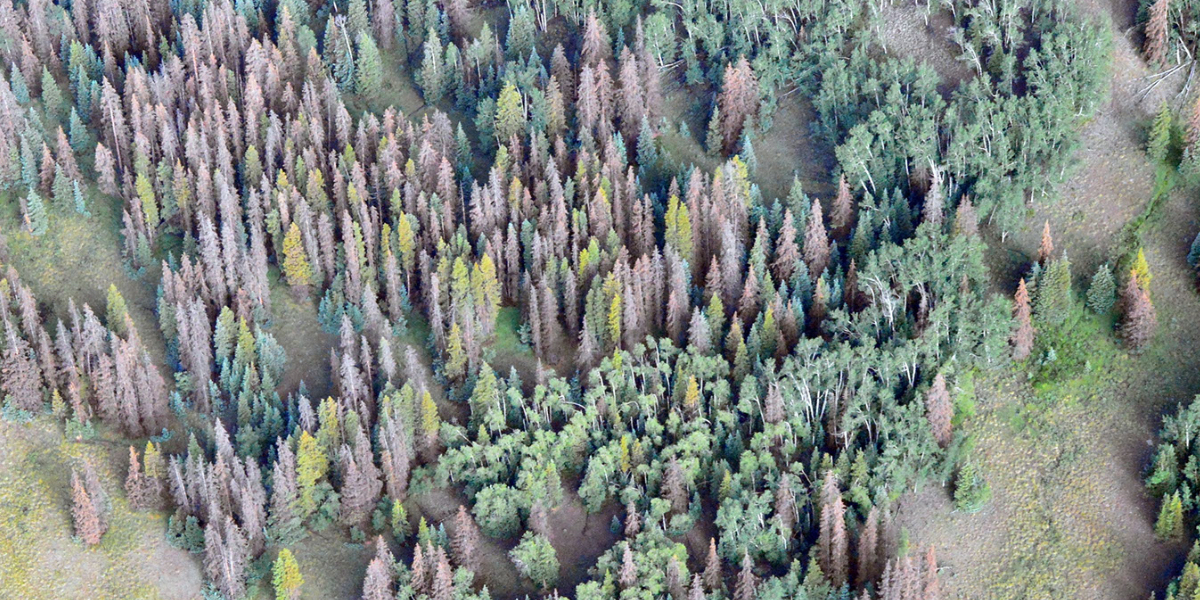 As much of Colorado tries to cope with the impacts of the recent mountain pine beetle epidemic, a new beetle outbreak is occurring in Southern Colorado and moving North.

Remember the mountain pine beetle (MPB) (Dendroctonus ponderosae)? For many in Colorado, they’re impossible to forget. Between 1996 and 2015 the MPB tore through 3.4 million acres of Colorado’s forest, leaving a gray landscape in its wake. But in 2016, only 916 acres of forest were impacted by the MPB down from a high in 2008 of almost 1.2 million acres. As residents of the Roaring Fork Valley (RFV) saw the miles of dead lodgepole along I-70 in Summit County, many worried the RFV would be next. We were largely spared the devastation seen in other parts of the state, primarily due to the diversity of our forest. While communities focus on addressing the impacts of the MPB, another native pest, the spruce bark beetle, is devastating forests in southern Colorado and working its way north.

Spruce bark beetles (SBB) (Dendroctonus rufipennis) and MPB are in the genus Dendroctonus meaning “tree-killer”. Dendroctonus bore through the outer bark of trees to access the phloem where they feed and reproduce. Most Dendroctonus beetles, including SBB and MPB, can kill a host tree in a single generation by severely damaging the phloem such that the tree is no longer able to transport nutrients and water. Once beetles have killed a tree, it is easily infested by additional beetles as its chemical defenses no longer function. Both species of beetles carry a large variety of symbiotic fungi that help overcome the tree’s defenses as well as digest the woody biomass. Dendroctonus have a flexible life cycle with temperatures dictating how long it takes between when they lay eggs and when beetles are full grown and able to seek new trees to attack. In Colorado, it currently takes SBB two years to complete a life cycle. Unlike the MPB which is susceptible to extremely cold temperatures in early and late winter, the SBB hibernate at the base of the tree where snow typically insulates them from killing cold snaps.

Spruce bark beetles are present at some level in every spruce forest, but natural predators such as wood peckers or parasitic insects typically keep their numbers low. Historically, outbreaks have occurred following a large storm that brings down many spruce trees. Dead wind-thrown trees lacking chemical defenses frequently serve as a nursery for SBB, sustaining populations up to ten times greater than what a well defended living tree will host. Large amounts of wind-throw allow beetle populations to build to levels sufficient to overcome the limits of predation. Outbreaks also require ample mature trees, which the beetles are able to feed on.

People have waged war with bark beetles since the late 1700s when the Royal Society offered a reward for any method to effectively control the European spruce bark beetle (Ips typographus). Since that time, people, in an effort to save valuable timber from beetles, have tried just about everything imaginable to control them. Trees have been cut and left as ‘traps’ to later be removed and burned, and at other times, infected trees have been felled and burned on the spot.

In the early 1900s, proposals were made to electrify trees and zap beetles. Numerous chemical weapons have been deployed from methyl bromide to kerosene, cumulating with DDT sprayed from planes. In Canada, foresters tried blowing up infested trees with C4. Recently, pheromones have been used. During the recent MPB outbreak, the pheromone verbenone was used, but after several years of research the USFS concluded it was too inconsistent and expensive for large scale use. Another pheromone, MCH has been effective at preventing SBB outbreaks, but is cost prohibitive for large scale application. Finally, timber companies have attempted to beat beetles at their own game, clearcutting forest ahead of outbreaks.

In all cases, efforts to stop outbreaks at large scales have been largely ineffective. At best, they delay the damage or save a small portion of forest. Most major outbreaks end the same way with the death of most mature trees and the beetles running out of food. Before anthropogenic climate change, wildfire and beetle outbreaks were a normal source of disturbance in western forests. As with recent “megafires”, the current series of beetle outbreaks are outside of what is historically normal, propelled by the impacts of human- caused climate change these beetles and fire are reshaping forest in the western United States.

Beetle outbreaks are strongly linked with temperature and drought conditions. When temperatures increase, the life cycle of the beetles are accelerated and they’re able to more quickly mature and attack new trees. More importantly, drought conditions weaken trees impairing their ability to repel attackers. Climate scientists expect both temperature and drought to increase as a consequence of further global warming. Despite previous failures, attempts to control beetle outbreaks or limit the number of infested trees continue. Spruce-fir forests are an iconic part of the Roaring Fork Valley and no amount of pesticide, logging or pheromones can save them from a changing climate. If beetles don’t kill the spruce trees, then fire or drought will. If climate change continues unabated, we cannot expect forests or other landscapes to stay the same.