What Happened to Our Snow?

The 2016-17 snow year began with little snowfall in December, but gave way to a near record-breaking January, then finished with a warm late Winter and Spring. Was this just another variable winter in Colorado, or are the impacts of Climate change being felt? A closer look at snow and temperatures in different parts of the Roaring Fork Valley may offer some hints.

At the end of January, the Roaring Fork Valley was on track for a potentially record-breaking snow year. Local newspapers ran headlines extolling the near record breaking snowfall. Through February and March, the tone of conversation changed as unending snowstorms gave way to high temperatures and ample sunshine. On February 1st, weather stations across the valley reported 143-225% of median snowpack. On April 1st, stations reported 80-153% with a larger drop at low elevation stations such as McClure Pass, a clear change from the ample snowpack of January. Snowpack isn’t determined simply by how much snow falls out of the sky, but instead reflects a complicated relationship between precipitation, temperature and timing. ACES analyzed snow and temperature records to see what happened to the snow this winter.

After the near record-breaking snowfall in January and the warm and sunny late winter, the peak snowpack at high elevations was normal. At lower elevation, on the other hand, peak snowpack occurred three weeks early (see graphs on opposite pages). Precipitation patterns at both stations were similar, but a close look at temperature revealed some key differences.

Table 1 shows the average daily temperatures by month for both Independence Pass and McClure Pass. Both stations show a similar warm anomaly, which can account for some of the melting.

Of particular interest is the month of March on McClure Pass. Prior to this, while mean temperatures were warmer than expected for both stations, they remained below freezing. In March, the mean daily temperature went from being about 31.5 degrees to being 38 degrees. It would appear that warming at McClure Pass during the month of March caused the freezing point threshold to be crossed, resulting in both increased rates of melt off as well as precipitation events occurring as rain rather than snow.

Each of the past three years briefly held the title of “hottest year in recorded history” for global temperatures. It’s clear that the climate is warming and hotter years will become more common. Climate models indicate that the Rocky Mountain region will experience warmer temperatures year round, and while precipitation models are uncertain with respect to changes in total precipitation, many point to fewer, but more intense, precipitation events. This description closely mirrors what we saw this year: Temperatures were almost universally warmer and we received the vast majority of our snow over the course of one month. This doesn’t mean that all future years will look like this, or that we’ve never had a year similar to this one. Climate change affects the expected outcome making some events (such as warm winters) more likely, in effect, stacking the deck.

Anticipated climate change impacts are often predicted to be nonlinear. In other words, multiple years may pass with minimal impact from climate change until some threshold is breached and the impacts become apparent. The threshold between rain and snow is an obvious one: temperatures can shift and it may not change the amount of snow an area receives or the depth of snow pack, but at some point in time precipitation begins falling as rain instead of snow. Crossing this threshold has profound implications for both natural and human systems.

In Colorado, our snowpack is our most effective reservoir; snow in shaded alpine environments typically lasts well into June. Thirty million people and 4 million acres of cropland depend on water from the Colorado River. Without the natural storage from snow, meeting these demands will be a growing challenge. Most of the southwestern US receives the majority of its precipitation as snow during the winter. Throughout the year, the slow melt of snow keeps moisture in the soil for plants, and water in the rivers for wildlife. Without the steady supply of water during the dry summer season, flora and fauna begin feeling the impacts of drought. As we continue to pass climate thresholds, both human and natural systems will suffer. 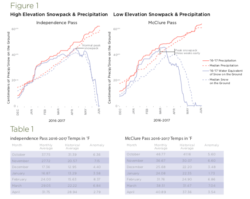