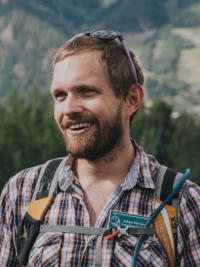 Forests aren’t good at recognizing boundaries. Human boundaries like cities, counties, and states certainly have no meaning. Even natural boundaries like rivers and high ridges are simply obstacles to be surmounted. Tree pollen, carried by the wind, can travel over 100 km before eventually fertilizing another tree. Seeds have crossed oceans. For those of us who work on forest issues…

For the past five years Aspen Center for Environmental Studies (ACES) has released an annual State of Forest Report for the Roaring Fork Watershed. For this year’s report ACES has partnered with Mountain Studies Institute (MSI), to co-produce reports for the Roaring Fork Watershed and the San Juan Watershed. The two reports are similar in many ways, they both focus on the same topics and contain much of the same information, but in the tradition of previous reports each report is still focuses on local forests and what current conditions, knowledge and trends mean for them.

While our forests and watersheds are unique they share many similarities and we both gapple with the same issues of wildfire, drought, insects, and climate change. Co-producing has helped us learn from each other’s experiences and better understand our own forests. Within the report we hope readers in the Roaring Fork will find lessons from the San Juans and visa versa.

For the first time we are dedicating an entire report to a single issue and how it pertains to forests. This year’s report focuses on water and forests, how they interact, how their interactions influence human communities, and how they’re both changing. We chose water as a focal point for several reasons. It was obvious even during last winter that water in 2018 would be a pertinent issue. Unfortunately, for most of Colorado lower than average summer rains and above average temperatures have only exacerbated the drought. Communities around the state are grappling with impacts in the form low rivers and wildfire

In our exploration of forest and water we start at the small scale, thinking about how a single tree might experience drought and how those conditions can lead to its death (see Thirsty Trees). From there we move up in scale and see how drought, fire, and subsequent flooding are impacting communities (see The Forest, the Fire and the Flood). Like a pebble causing ripples in a pond drought in Colorado’s forest is felt far beyond our borders. The mountains and forest in Colorado provide water to 60 million people from the front range of Colorado to the coast of California and Mexico (see Forest at the Headwaters). Finally, we look to the past and the future to see how this year fits into a broader trend and what climate science says about drought.