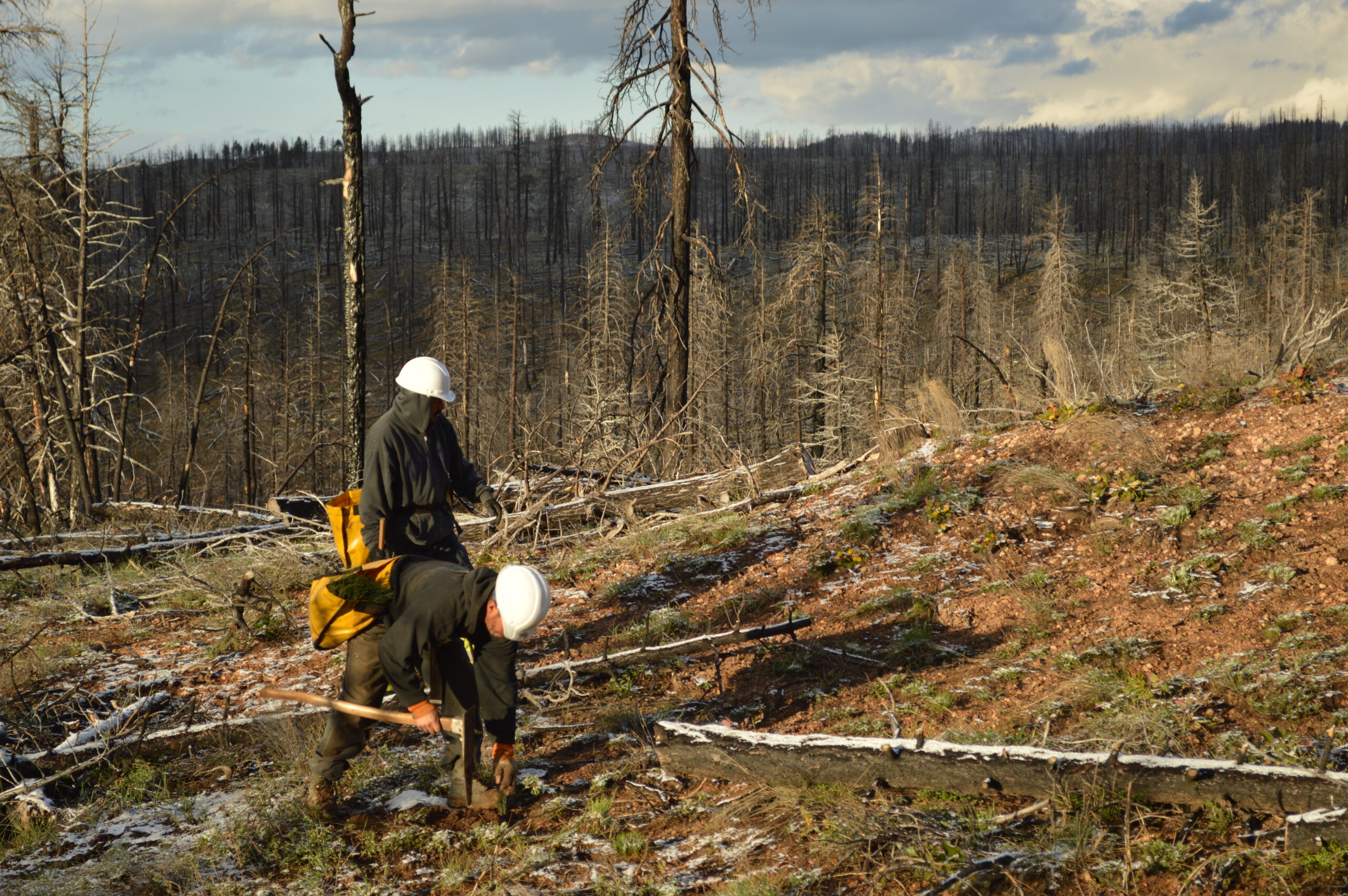 After a forest burns, both human and ecological communities impacted by the fire undergo change, but not always at the same place.

Recover after a wildfire can be a long and painful process. In addition to secondary effects like erosion places many of us hold dear are dramatically changed for the rest of our lives. After more than 20 years Weller Lake and Storm King Mountain still bear scars from wildfire. Climate change impacts the scale and frequency of wildfires in Colorado, as well as the resiliency of forests and their ability to regenerate post-burn.

While shifts in species composition after a fire are, to some extent, normal and expected, the rate and scale of change and the dramatic shift in species composition in the 21st century are heavily influenced by temperature and drought stresses attributed to climate change9. When a “disturbance event”, like wildfire, moves through a forest, it resets the ecosystem. Under normal conditions, forests could come back as they were before. But drought and warmer temperatures make it hard for young trees to establish themselves, and open the door for more drought-resilient ecosystems (like shrub or grasslands).

Forest ecosystem shifts happen on a time scale that is rarely in synch with the demands of human development. What might be good for the forest or a landscape over hundreds of years is rarely convenient and often detrimental to the ways we’ve come to rely on our forests and watersheds; we rely on water where we’ve built, and need forests to burn around our homes, rather than through them. This tension of living with and relying on forests that exist on a different timescale than we do is exacerbated by the impacts of climate change.

“Given the impacts of climate change, forests are less likely than before to return to their pre-fire conditions.”

For both human and forest communities, response to wildfire occurs in stages. Early on, before the first fires of the season ignites, humans make predictions about what kind of fire year lies ahead. We zoom in on precipitation records, identify drought trends, and assess the potential for human-caused ignitions and opportunities (like forest closures) to minimize that risk. In the forest, conditions for fire are determined by factors, like precipitation and temperature, that go back years. In a year like 2018 and the Lake Christine fire, the moisture content of standing fuels was extremely low. A small fire was able to grow rapidly to the point where it couldn’t be easily contained, the combination of drought, high temperatures, and humans made for an extremely dangerous situation.

Once a fire is burning, human response focuses on the management of the burn for the protection of communities and infrastructure. Fuels, the moisture content of trees, and weather patterns will dictate how fire moves through the forest and at what intensity it burns. In addition to trees, forest soils can undergo major changes during a wildfire, depending largely on the burn severity. The burning of litter and organic matter at intense heat turns into a sort of waxy substance that penetrates the soil as a gas, but as the air cools, turns to a solid. This new-formed soil is hydrophobic and acts like a layer of heavy-duty black trash bags laid out on the forest floor, repelling water and increasing erosion10. During a fire, some parts of the forest may experience high severity burns while others experience low, so hydrophobic layers often occur as patchwork, covering only the most severely burned parts of the fire.

The complicated and critical connection between forests and watersheds is often reestablished at the first return of rains to a burn area. When rains finally return and pour over this hydrophobic layer, which is sometimes buried inches deep, they can send a flush of sediment and ash-ridden water into nearby creeks, streams and rivers, sometimes damaging homes or communities and inundating critical water infrastructure. Under ideal conditions, initial and subsequent precipitation may be in the form of snow, with winter freezing and thawing helping to break up hydrophobic layers.

Although post-fire flooding can feel like salt in an open wound for humans, floods can have important benefits for watersheds and surrounding forests. While the initial influx of sediments and organic matter into watersheds can heat rivers and kill fish and other aquatic life, over the long-term the distribution of nutrients and debris can create critical habitat for and improve river health. Of course, many of the benefits and harm derived from a fire depend on how the fire burned. For example, a low-severity fire might deliver a small influx of sediment and debris into a stream, while a high-severity fire may release so much sediment into a watershed that it destroys habitat for and suffocates aquatic life, degrades water quality and damages infrastructure.

Regeneration and recovery are the next steps for both forests and communities, but they occur on very different timeframes. Communities impacted by a wildfire may take decades to recover – for homes to be rebuilt, infrastructure repaired, and economic losses stabilized. And, some things may not be rebuilt.

The same is true for forests, but the scale of change and time for recovery are much greater. And, given the impacts of climate change, researchers predict that forests are less likely than before to return to their pre-fire conditions and wildfires may act as catalysts for dramatic landscape-scale changes species that are better acclimated to hotter and drier conditions